zekeunlimited ……………………..Limits are for governments.

The Gift of Fire to Mankind: A Mythical Study on the Spiritual Significance of Coal, Part 1 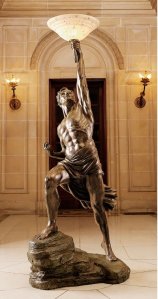 Lest we forget. Image credit: purchase or view this lamp online

Introduction: This week will be set aside for a study of the myths relating to the giving of fire to mankind. It is, not surprisingly, a story passed down from distant antiquity by people and nations from every corner of the world, spoken in vibrant and mysterious forms through tragic dramas and curious legends.

While some fire myths are as familiar and evocative to the Western mind as ever, and are still included in any Classical liberal arts education worth its salt (see photo of my Christmas wish for 2011), other celebrations of the gift of fire require slightly more attention to the spirit of the traditions, rather than the letter, in order to be perceived. But the memory is clear: with fire came light, heat, savory cuisine, the charms of hearth and home, and the ability to forge new tools and art from the minerals of the earth. Fire lifted the struggling people, who were previously but little elevated above the beasts in their powers and living conditions.

Today, we bring lights, heaters, ovens and refrigerators – along with a host of wonderful electronic gadgets – to life through electrical energy delivered to our homes by power plants. In the year 2008, 41% if the electric power generation in the entire world was generated by coal – that is, the burning of coal. Indeed, by fire – that ancient gift and help to mankind – transformed into electrical energy by moving wires in a magnetic field. In the US, coal power generation was slightly higher than for the rest of the world at 45% in 2009. On its brightly colored green website, the US Department of Energy boasts of bringing this figure down dramatically in the future, through economic policies, mandates, subsidies and other coercions, stating that the carbon dioxide molecules emitted in the coal fires is a danger to the atmosphere.

Has something changed? Is fire no longer to be used for the use, good, happiness and benefit of mankind? Or is there something within the myths which also tells the story of those who did not want this gift to be given to man, and sought from the beginning to either prevent its capture, or to take it away? We will have a further look at these world legends for the next several days, so please drop by.

This entry was posted on December 20, 2011 by Zeke. It was filed under electricity, life, The Gift of Fire to Mankind: A Mythical Study .